I have always been a very hands-on person who enjoyed activities that would keep both me both mentally and physically active. A talent that I would like to possess most would be gardening and spending time in the backyard planting trees, herbs and vegetables. Due to my physical disability, I am not able to physically work in the garden, however I often spend time with my husband and enjoy watching him working in the backyard.

What is your favourite word in English or Persian? Why?

I would have to say my favourite word in Persian is ‘Azadi’ which translates to Freedom. I also named my first child ‘Raha’ which loosely translates to being free. In my opinion, freedom is a basic human right which is a necessity for an individual’s happiness and freedom of choice, to be who they are and choose to live their life in the way they choose.

Tell me about an amazing woman you know.

I have always been inspired by Marie Curie who is a French-Polish physicist. Marie Curie is remembered for her discovery of radium and polonium, as well as her huge contribution to finding treatments for cancer. She received a Nobel Prize in Physics in 1903 and a Nobel Prize in Chemistry in 1911. I have always looked up to her as an amazing woman as she was the first and only woman to win 2 Nobel Prizes which is amazing considering the rights women had in 1900’s.
Can you tell us about your art?
Ever since I was a child, I would observe my mother knitting, and from the age of 8, I started learning how to knit myself. This became a hobby of mine which led to knitting jumpers and jackets for my family for 3 generations now. During the COVID-19, with a lack of social interaction and being isolated at home, I started reading about the human biology which led me to design and knit health related graphs. The first knitting I completed was the ‘Period Tables of the Elements’, which followed by different knitting’s of the human anatomy such as DNA, heart, kidneys, brain, lungs ear, eyes and nose. The knitting’s also included logos of medicine, psychology and astronomy which are the fields my children are passionate about. 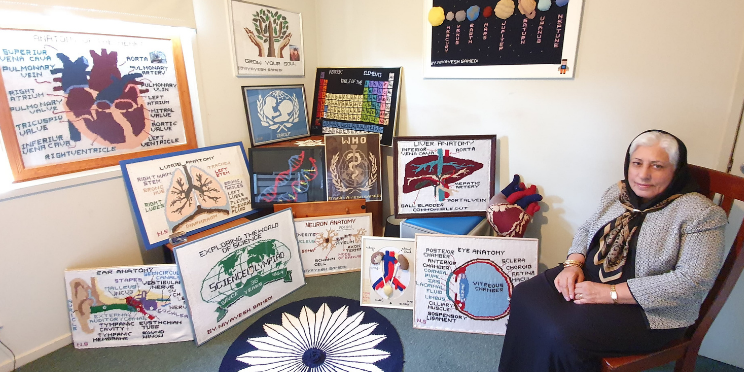 If you could change on thing about the world, what would it be?

If I could change one thing about the world, I would change gender inequality as I believe everyone should have the same rights and responsibilities. I believe someone’s gender does not make them superior to someone else. This would mean there would be equal access to education and jobs for both women and men, and therefore everyone would have the same opportunities for a better life.