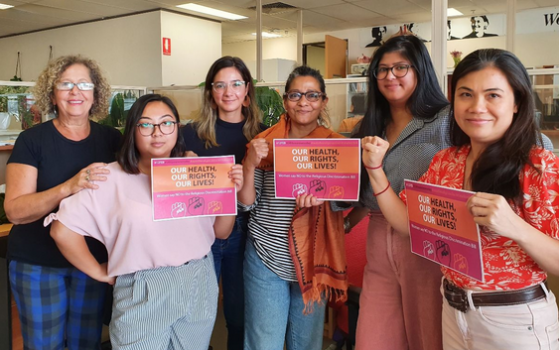 Just when we thought that we womb-havers were finally gaining control of our bodies when it came to our reproductive health (abortion is now decriminalised in all Australian States and Territories and there are laws setting up safe access zones to clinics providing pregnancy choices services) along comes the Religious Discrimination Bill. First announced in 2019 and now in its second draft, the Bill has been under heavy, and we think justified, criticism from community groups, health professionals and faith-based groups.

The objectives of the proposed legislation sound all well and good. One of them, for example is “to ensure, as far as practicable, that everyone has the same rights to equality before the law, regardless of religious belief or activity”. This sounds like something we can get behind, because too often women living in Australia experience violence and discrimination on the basis of their faith. So on the face of it a law that stops people from being discriminated against because of religion is a positive thing. However, when it comes to health, what this Bill actually does is allow discrimination against others by effectively over-riding existing Commonwealth, State and Territory anti-discrimination laws.

In the context of women’s health, the Bill will create even more barriers for women seeking access to sexual and reproductive health services. All women already face a range of barriers, such as shame, stigma, and availability of services when it comes to accessing sexual and reproductive health services such as contraception and access to safe abortion. Some of these barriers can be much greater in regional and rural areas, where there are fewer choices and fewer opportunities for anonymity.

Some examples of what the Bill will allow include:

For migrant and refugee women, some of these barriers to access may intersect with other forms of stigma or discrimination based on their country of birth, visa status, ethnicity and, ironically, faith.

The Bill represents a winding back of rights and freedoms that women have been fighting so hard for – and while MCWH will continue to defend the rights of every person to freely practice their faith, it can never be at the expense of women’s health and wellbeing. Religious beliefs should not override the right to health and access to healthcare. All religions believe in respect, and that should include respect for women’s health.